re you planning for a quick & affordable getaway away from the fast-paced hectic hustle at work? We got just the right package for that; Introducing Macau & the Greater Bay Area! Greater Bay Area (GBA) is an initiative by China to merge and link three city areas - Hong Kong, Macau and Guangdong, driving innovation, growth and tourism. With the recently developed transportation infrastructure such as the world’s longest sea-crossing bridge, Hong Kong - Zhuhai - Macau (HZM) Bridge and high speed trains, travelling to these cities and getting around just got easier!

Also known as the "Vegas of China", Macau has a rich cultural heritage from the colonial age as well as a bustling entertainment hub. Macau is much more than just casinos. It is also a designated UNESCO Creative City of Gastronomy!

Perhaps the most iconic sight of Macau, St Paul's Ruins is a favourite for selfies and IG & wedding shots. You probably remember seeing this site in the backdrop of some HK romance movies. There’s a steel stairway that allows tourists to climb up to the top of the facade to get a closer look at the stone carvings and also a panoramic view of the city below.

This catholic Church of St. Paul was designed by an Italian Jesuit and completed by early Japanese exiles and Chinese craftsmen in 1602. It was later left abandoned in 1762 before a fire in 1835 erupted and destroyed everything, except what remains today. Senado Square is a public town square in Macau and a part of the UNESCO Historic Centre World Heritage too. Spreading across 3,700 square meters, it is one of the four largest squares in Macau.

There’s plenty to do around Senado Square with numerous shopping spots, famous snacks and restaurants. Fireworks & other festive activities are also held here on special days like Chinese New Year and Christmas. Taipa Village is one of the best preserved areas on the south of the island. It used to be a fisherman village where locals made a living through fishing and other handicraft professions. Filled with plenty of iconic heritage spots, you'll be inspired by the historic cultural relics.

No holiday is complete without good food. Taipa Village also has plenty of delicious gourmet for the foodie in every one of us. From the familiar Portuguese Egg Tarts and durian ice cream to Portuguese Pork Knuckles. With a generous selection of gourmet from local to international fusion food, you'll be spoilt for choice!

Zhuhai is a modern city in Guangdong province, on the border with Macau. It was transformed into one of China's first Special Economic Zones back in 1980. The city is well-known today for its golf resorts, theme parks and islands off the Pearl River Delta. Located on the eastern coast of Zhuhai, Lovers' Road is a coastal road spanning over 17 km. It meshes and reflects a blend of nature and culture.

With the blue sky and a panoramic seaview as the backdrop, travelers can take a leisurely stroll along this stretch. You can also find plenty of bars and restaurants here to take a break and refresh as you watch the bustle pass by.

Perhaps one of the most iconic landmarks in Zhuhai, Zhuhai Opera House is shaped as scallops, symbolizing both the sun and the moon.

Covering a floor space of nearly 50,000 sqm and capacity of 1,600 seats, the brand-new opera house costs about US$158 million. With advanced acousto-optic and technical effects, the concert hall hosts several large-scale performances and variety shows. Lying at the foot of the Stone Forest Mountain of Zhuhai, New Yuanming Palace was opened in 1997 to memorialize the prosperity of Old Summer Palace (Yuanming Yuan) in Beijing, when it was since devastated some 140 years ago by foreign invaders.

New Yuanming Palace consists of three parts; the imperial gardens of the Ming and Qing Dynasties, the classical gardens of Southern China and the Western building. You’ll find yourselves surrounded by beautiful scenery (both natural & architectural) and cultural heritage.

Jiangmen is just west of Zhuhai and is home to cultural treasures such as the UNESCO World Heritage Kaiping Diaolou and Villages. Across the Xinhui district and four counties of Jiangmen, there are over 3,000 diaolou.

Opened since 1985, Wuyi Overseas Chinese Museum has a collection of 35,000 artifacts and relics showcasing the role of overseas Chinese and their hometowns in modern history.

The exhibition is divided into Jinshan Dream, Overseas Business, Loyalty unto Death, The Rise of Overseas Chinese hometown, New Chapter of overseas Chinese Hometown and Chinese Honor. Take a trip back in time as you walk through the different sections and examine the antiques and historical relics. 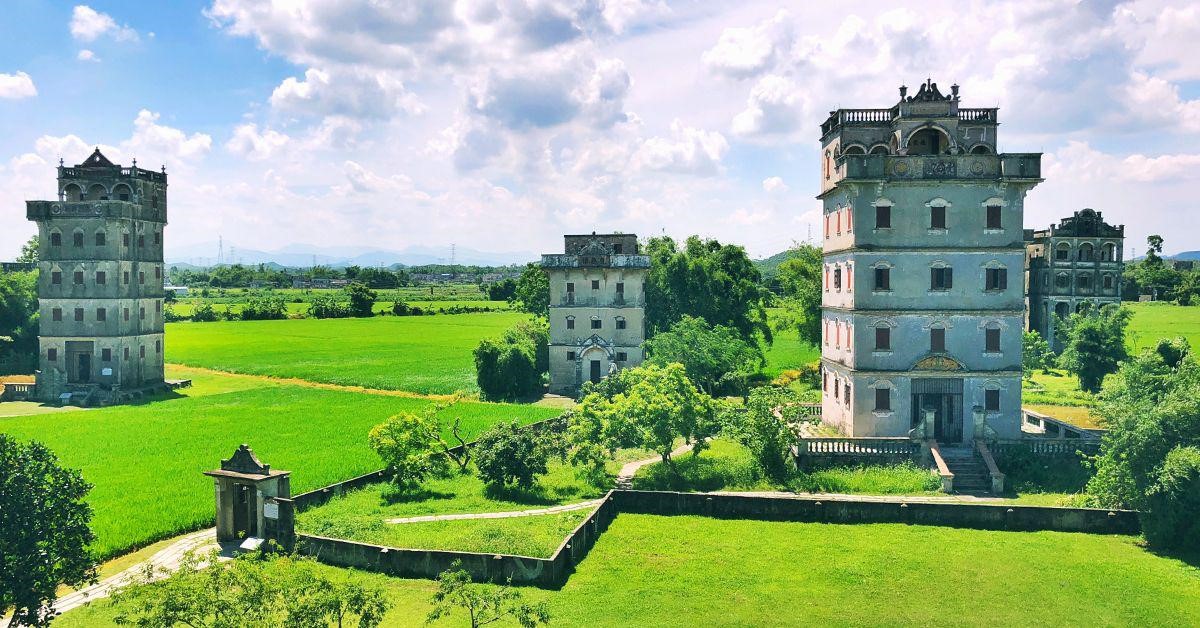 Listed on the World Heritage List in 2007 as China’s 35th World Heritage Site, Kaiping Diaolou and Villages is a showcase of the flamboyant fusion of Chinese and Western architectural and decorative elements. Nearly 2,000 diaolou towers stand amidst the fields of the lushious countryside.

Diaolou is a multi-storeyed structure that was used defensively in the past; either as a watch tower, fortified residence or temporary refuge. Today, they are still in a relatively good condition and serves as a heritage testament. Located in the Panyu District, Bao Mo Garden was first built at the end of the Qing Dynasty (1644 - 1911 AD) before it was damaged in the 1950s. It would later be rebuilt in 1995. After taking five years to finish renovating Bao Mo Garden, it now covers an area of over 66,000 sqm.

The elements in this garden are carefully and harmoniously integrated and laid out. From the cultural elements of the Qing Dynasty to the architectural characteristics of ancient Canton and the landscape art style of Linnan and Zhujiang.